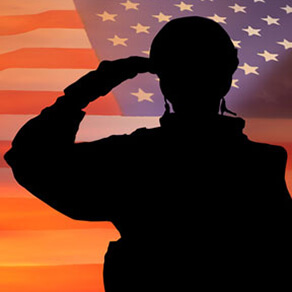 According to the Federal Trade Commission, veterans lost approximately $60 million to fraud in 2020. Active-duty military personnel and their spouses and dependents also suffered big financial losses to fraud last year. In fact, in 2020, military consumers lost more than the general public to fraud — a median $600 compared to $311 for nonmilitary consumers. Here’s what you and military friends and family need to know.

The greatest fraud threat to this group is “imposter” fraud. In this scheme, a criminal calls, emails or texts potential victims and pretends to be working for the Veterans Administration or another government agency. Perpetrators may claim they need personal information, such as Social Security or bank account numbers, to authorize the release of benefits. Instead, they use that data to commit identity theft.

In a variation of this scam, perpetrators pose as financial advisors who convince vets to exchange their pensions for up-front cash payouts. In most cases, the payouts are worth less than the pensions. Or fraudulent advisors may tout special benefits programs that can only be accessed by paying a fee. After paying, the fraud targets learn the programs don’t exist.

Unfortunately, many other types of fraud focus on vets and active-duty members — including fake job recruiting, loan, tax and charity schemes. One particularly vicious scam targets family members of deployed military personnel. Criminals claim the military member has been injured or is stranded and that the family must wire money.

If you receive a communication from someone claiming to be a government official, offer to contact him or her at the agency’s official phone number. Don’t provide any information about yourself until you’ve independently confirmed the person’s identity.

Military personnel, veterans and their families face a myriad of fraud risks. Be skeptical when reviewing claims, offers or information requests that aren’t delivered through official channels. Contact us with questions.