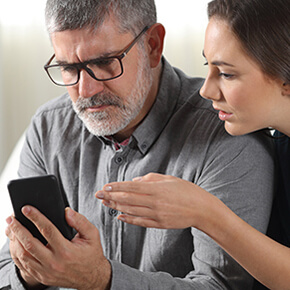 Despite the National Do Not Call registry and features such as caller ID, phone fraud is thriving in the mobile phone era. Using spoofed numbers — which appear to be connected to legitimate government offices and businesses or that resemble your own number — fraud perpetrators say anything and everything to try to steal your money.

Recently, scammers have posed as Social Security officials to steal from unsuspecting consumers. Since January 2018, the Federal Trade Commission has received more than 63,000 reports about this scam. Only 3% of reporting call recipients lost money, but the losses total $16.6 million.

Anatomy of a Crime

Here’s how the Social Security scheme works: Criminals call from spoofed phone numbers and tell consumers that their Social Security number has been linked to a crime and has been “suspended.” The callers claim that the consumer’s bank accounts will be seized by the government unless they withdraw money and transfer the amount to gift cards. While the thief remains on the line, the consumer purchases the gift cards. Then the caller asks for the gift card numbers and PINs, supposedly for “safekeeping.” With that information, the fraudster uses the cards or sells them on the black market.

Truth of the Matter

The truth is that the Social Security Administration doesn’t suspend Social Security numbers, nor does it ask people for their numbers over the phone. And no government entity would ask for payment in gift cards. Criminals hope that you aren’t aware of these facts. They also use fear — of arrest, loss of savings and, in some cases, deportation — and a sense of urgency to get what they want.

Fortunately, you can avoid becoming snared in a Social Security phone scam by following some simple guidelines:

Note that it’s not just consumers who might fall victim to phone fraud schemes. Fraudsters also target businesses to secure sensitive information such as bank account numbers, routing numbers and passwords. If you’re a business owner, educate employees about phone scams and implement fraud controls. Contact us for more information.