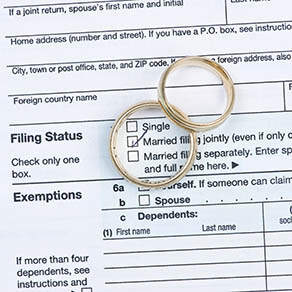 The Marriage Penalty Still Exists Under the TCJA

One byproduct of the Internal Revenue Code is that the tax liability of married couples who file jointly may be more than their combined tax liabilities would be as single filers. This is “the marriage penalty.”

Unfortunately, this hasn’t gone away under the Tax Cuts and Jobs Act (TCJA). For example, through 2025, the TCJA imposes a $10,000 limit on itemized deductions for state and local taxes. The limit is the same for joint filers and single filers. That means unmarried couples can deduct $10,000 each, for a total of $20,000, while married couples can deduct only $10,000. (There have been proposals in Congress to eliminate the limit.)

If you’re getting married, we can help you crunch the numbers and see how your union will affect your tax bill. No one would suggest that a potential marriage penalty should influence your decision to tie the knot, but knowing the impact can help you make informed financial planning decisions.