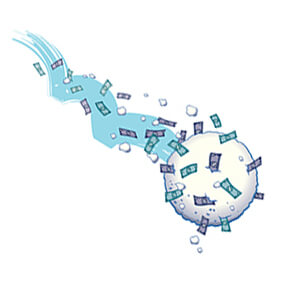 Throwing Snowballs at Your Mountain of Debt

Many people start the year intending to get out of debt, yet end the year owing just as much, if not more. One approach that might yield success is called “throwing snowballs.”

Under this method, you organize your debts from the lowest balance to the highest balance and begin paying off the debt on top of the list. The idea is to throw as many “snowballs” as you can gather or earn at that first creditor until the debt is gone.

While you hurl these snowballs, pay the minimum amount to your other creditors. Avoid trying to send an extra $20 or so a month to each one. If you want to contribute extra money, throw it at your primary target.

Once the first debt is paid off, you should have even more money to send to the next one. Over time you can start heaving bigger and bigger snowballs at the remaining targets because, as you pay off each debt, you’ll have more money to pay toward remaining debts.

The objective is to start an avalanche of payoffs until your debts disappear. Under this method, the best predictor of success isn’t the number of dollars you pay off but rather the number of accounts that you close.

Please note: There’s some debate on the practicality of throwing snowballs. Opponents argue that you should first pay off debts with the highest interest rates. We can help you choose a debt-reduction strategy that’s right for you.