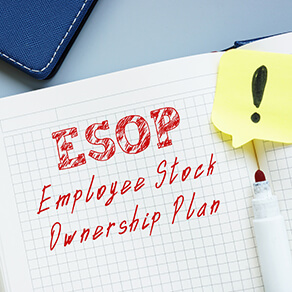 Weighing the Pluses and Minuses of ESOPs

Corporate finance, employee benefits and succession planning likely are key issues you have to contend with as an owner of a manufacturing company. Did you know that there’s a multifaceted strategy that can handle all three issues? It’s the employee stock ownership plan (ESOP). But before getting too excited about ESOPs, it’s important to learn their drawbacks as well as their benefits.

An ESOP is a qualified retirement plan that’s similar to a profit-sharing plan, except it enables employees to own part of the company that employs them.

To create an ESOP, your company sets up a trust and contributes new shares of its stock to it. You also can contribute cash, which is then used to buy shares from existing owners. The trust, the legal owner of the stock, is overseen by a trustee appointed by your company’s board of directors to operate in the interest of the employees.

In general, there are two types of ESOPs — unleveraged and leveraged. With an unleveraged ESOP, a company sets up a retirement trust and contributes to it. The trust uses this money to buy new or existing shares of the company’s stock. A leveraged ESOP, on the other hand, borrows money from a financial institution and uses those funds to buy new or existing shares. The company then makes cash contributions to the plan to repay principal and interest on the loan over a period of years.

Leveraged ESOPs can particularly suit an owner of a private manufacturing company who’s looking to sell all or part of his or her business while keeping it in the hands of existing owners, family members, management or employees.

On the Plus Side …

As mentioned, under the right circumstances, an ESOP can offer many benefits. Selling equity to employees allows you to cash out your investment while deferring tax on any capital appreciation.

If you sell 30% or more of the company to the ESOP, you may roll over the proceeds into other qualifying “replacement” securities — for example, securities of a domestic operating company — without incurring taxes on the gain.

When your employees leave the company, they’re entitled to the vested portion of their respective accounts. Employees of public companies retain ownership of their stock with the option of selling it on the open market.

When employees of private companies leave the business or die, however, their employers must repurchase their ESOP stock (at fair market value) to fund the employee’s retirement benefit. Private companies with ESOPs also need to hire independent appraisers to determine their stock value each year.

Getting back to the benefits, contributions made by your company to service the ESOP loan are deductible (within certain limits), and the transaction essentially allows the company to deduct the entire principal and interest on the loan repayment if it has a leveraged ESOP.

Dividends paid on the ESOP shares also may be tax deductible. As the loan is paid down, shares are allocated to participants’ accounts within the ESOP. Employees may be able to treat a substantial portion of their distributions as long-term capital gain rather than as ordinary income.

On the Minus Side …

You can use an ESOP only if your manufacturing company is structured as a C or S corporation. Partnerships or professional corporations typically aren’t eligible.

With unleveraged ESOPs, a private company, as already noted, must repurchase a departing employee’s shares. Thus, the business must have cash reserves available for the purchase, which could be a significant expense if a large number of workers were to quit or retire at the same time. Moreover, when the company issues new shares, the ownership percentage of existing owners is reduced.

Then there are financial and administrative challenges to contend with. In addition to dealing with the large initial investment and yearly fees, you’ll face annual filing and maintenance requirements of various IRS forms as well as compliance with rules and regulations specified by the Employee Retirement Income Security Act.

Last, bear in mind that, because these arrangements are prohibited from paying more (or less) than adequate consideration for the employer’s stock, ESOPs can raise some complex valuation issues. Thus, it’s essential that a qualified, independent appraiser determine the fair market value of a closely held company’s ESOP shares both annually and when shares are acquired from the existing owners.

Is an ESOP Right for You?

An ESOP can be an effective way of transferring ownership of your business while meeting retirement and business goals, but you need to consider its drawbacks. Before you establish an ESOP, weigh your options carefully, contact us or discuss it with your tax advisor.