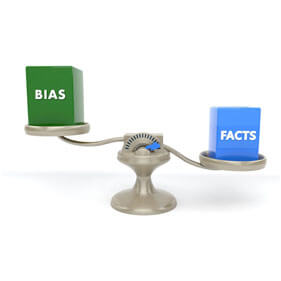 When Investigating Fraud, Beware of Bias

Despite our best intentions, almost everyone brings some bias to human interactions — even business owners and executives investigating fraud. Sometimes bias can lead to the right conclusion. However, bias can also compromise an investigation’s integrity. If you suspect fraud in your organization and decide to investigate yourself, be sure to guard against bias that may lead you to the wrong culprit or into legal trouble.

One of the most destructive types of bias is preconceived notions about employees based on their gender, race, ethnicity, religion, sexual orientation and similar personal characteristics. Not only is this type of identity-based bias generally illegal in the workplace, but it can lead to erroneous conclusions regarding an employee’s guilt or innocence.

Members of a fraud investigation team should make every effort not to judge employees based on anything other than the facts of the case. It’s critical that investigators gather and analyze relevant data with an open mind. To avoid stereotyping, engage your company’s legal and human resources managers early in the process.

Some types of bias favor certain employees who may actually be guilty of fraud. For example, a senior executive may dissuade investigators from looking into the activities of a favorite team member. Or some employees may be considered “immune” to investigation based on their position or relationship with the business’s owner.

To avoid this type of bias, make sure that your fraud investigation follows the same procedures and applies the same amount of scrutiny to every employee who might be involved in fraud activity. The same goes for possible witnesses.

One of the best ways to get to the truth about possible fraud is to listen carefully. When biased investigators conduct only pro forma interviews of suspects and witnesses or dismiss everything they hear, they miss out on critical information that could lead to stolen assets and the thief.

The solution? Assign two investigators to employee interviews. The primary investigator can lead the discussion while the second investigator takes notes and follows up with questions the lead may have overlooked.

Eradicating all bias, even when the stakes are as high as they are during a fraud investigation, is probably impossible. But engaging the help of fraud experts can keep your investigation as objective as possible. We’re experienced at following evidence wherever it leads and interviewing employees without preconceived ideas. Contact us if you suspect fraud.